At Baldwin de Boulogne’s death the throne of Jerusalem passed to Baldwin de Bourcq. The latter was crowned alongside his Armenian wife Morphia on Christmas Day 1118 at the Church of the Nativity in Bethlehem as Baldwin II.  Baldwin was undoubtedly an able king, but not always a lucky one. His misfortune included being taken captive and held for ransom. 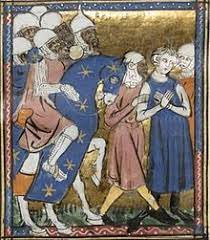 Nevertheless, it was during Baldwin II’s reign that the vital coastal city of Tyre surrendered to the Franks after a five-month siege aided by a large Venetian fleet. The latter had first intercepted and destroyed the Fatimid navy at sea. The Muslim population of Tyre was granted the right to withdraw with their moveable possessions, but the Venetians ran riot and, against the terms of the surrender, engaged in acts of violence. Baldwin II also successfully defeated a coalition of Turkish forces at the Battle of Azaz on 11 June 1125.

Equally significant, during Baldwin II’s reign the Franks began to systematically build castles of their own rather than merely occupying existing fortification as they had done up to this point. Counter-intuitively, most of these castles were built in the parts of the kingdom that were already secure. They were built not in areas threatened by Muslim raids and incursions, but rather in regions of significant agricultural production and near concentrations of Christian inhabitants or important Christian shrines and pilgrim destinations. The obvious conclusion from this pattern of building was that these castles were not part of a defensive perimeter nor primarily defensive in character at all. Rather, these castles were an expression of growing administrative sophistication and control. The exception to this rule was the great castle of Montreal. This was built as an intimidating stronghold controlling the lands beyond the Jordan (the Barony of Transjordan) and threatening — or at least watching — the lines of communication between Egypt and Damascus.

Baldwin II was also responsible for the first codification of laws for the kingdom at an ad hoc ‘Council’ at Nablus, attended by both secular and ecclesiastical lords. He continued his predecessor’s policy of encouraging settlement, particularly appealing to the great monastic orders to establish houses in his kingdom. The importance of monastic presence was that the religious orders enjoyed huge patronage in the west and brought these enormous financial resources to bear when they established houses in the East. In short, the religious orders could tap the resources needed to rebuild and renovate the Christian churches and convents left in ruins by four hundred years of Muslim occupation. The religious orders of this period were also known for the sophistication of their administration and for fostering the introduction of modern agricultural techniques. Monasteries across Europe were bringing marginal land under cultivation and increasing yields through the construction of expensive infrastructure such as terracing, water mills, and irrigation.

Although we know little about the details, under Baldwin II the Kingdom of Jerusalem evolved efficient administrative, financial and legal structures. These were sufficiently robust to function even in the absence of the king. Taxes and duties were collected regularly, properly recorded and allocated to important building programs and the vitally important military operations. The construction of castles and cathedrals required quarries, roads, harbors, and other forms of infrastructure, which suggests that the economic base of the country was growing rapidly. Likewise, the population and the number of pilgrims was evidently increasing rapidly.

These factors combined enabled Baldwin II to take the offensive against two of the most important Seljuk power centers: Aleppo (in 1124) and Damascus (1129). The latter siege particularly was a major operation that appears to have been defeated more by bad weather than by enemy action. Furthermore, the Sultan was sufficiently unsettled by the Frankish threat to agree to an annual tribute of 20,000 dinars to be left in peace. This latter point underlines the degree to which the Seljuks as well as the Fatimids viewed the Franks as dangerous opponents. At his death on 21 August 1131, Baldwin II left behind a kingdom stronger than ever. Yet his reign was over-shadowed by severe set-backs in the northern Crusader states, which I will look at in my next entry.

This entry is largely an excerpt from Dr. Schrader's comprehensive study of the crusader states.