Barely a year after the capture of Jerusalem by the First Crusade, the man elected by the crusade leadership to remain behind and defend it was dead. Godfrey was succeeded by his elder brother, Baldwin of Boulogne, a man of a decidedly different character -- but not without his virtues as his record would show. 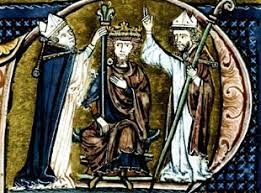 Baldwin, for a start, was not prepared to be a mere ‘Protector of the Holy Sepulcher;’ he wanted a crown — of gold. On Christmas Day 1100, Daimbert crowned Baldwin King of Jerusalem in the Church of the Nativity in Bethlehem, and with this act the Kingdom of Jerusalem came into being. Baldwin’s new kingdom, however, still consisted only of Jerusalem and its hinterland, including Bethlehem, along with a narrow, insecure corridor to the coast at Jaffa. It also still had only about 300 knights and at most 2,000 Frankish soldiers to defend it.

When Baldwin I died eighteen years later, he bequeathed a kingdom that stretched across the Jordan and from Beirut to Gaza, with only Tyre and Ascalon still in Muslim hands. In the north it bordered not a Muslim state, but the newly established crusader county of Tripoli. Much of this expansion was made possible by the support of the Italian maritime powers, who repeatedly sent fleets to the Eastern Mediterranean which aided in the capture of the coastal cities in exchange for receiving trading privileges in the newly acquired territories.

The Kingdom of Jerusalem captured Arsuf and Caesarea in 1101 and Tortosa and Jubail in 1102, all with Genoese support. Two years later the Genoese enabled Baldwin to take the vitally important coastal city of Acre. The following year the siege of Tripoli commenced with Genoese and Provencal maritime support; the city fell four years later (1109). Both the Pisans and Genoese assisted in the capture of Beirut in 1110, while Sidon fell to King Baldwin I aided by a Norwegian fleet under the command of King Sigurd. Notably, at Arsuf, Acre, and Tripoli, the cities surrendered on terms and the Saracen inhabitants were allowed to withdraw unmolested. Meanwhile, Galilee and Samaria were conquered and occupied by the Franks, pushing the borders of Frankish control across the River Jordan and south along the western shore of the Dead Sea.

Just as important as these offensive victories, however, were King Baldwin’s successful defense of his kingdom from tenacious attempts by Saracen powers to destroy it. The Egyptians sent a second army to regain Jerusalem in September 1101. At Ramla on 7 September, despite mustering only 260 knights and less than 1,000 infantry, Baldwin was able to put the Egyptians to flight — at the cost of eighty knights and many more infantry. The following year Baldwin again defeated the Egyptians, this time at Jaffa in May. Almost simultaneously, on 14 April, the Count of Toulouse routed a Seljuk army from Homs and Damascus near Tortosa, while tenaciously seeking to establish what would become the County of Tripoli. When in 1105 the Fatimids sent a fourth army to drive the Franks out of Jerusalem, Baldwin was able to meet them with a force of 500 knights and 2,000 infantry supported for the first time by mounted archers (i.e. native cavalry) in unspecified numbers. With this force, Baldwin decisively defeated the Egyptians on 27 August 1105 in what became known as the 2nd Battle of Ramla. A Frankish defeat at any of these battles would almost certainly have ended in the obliteration of the still nascent Kingdom of Jerusalem.

How then were these victories and the related expansion possible? Where did the replacement for the dead of the First Battle of Ramla come from? How could Baldwin field almost twice as many knights in 1105 as in 1101?

The key was settlement. Baldwin actively encouraged Christian settlement in any territory he could wrest from Muslim control. Significantly, this included inviting Syrian Christians to relocate from Muslim-controlled to Christian-controlled territory as well as welcoming Christian settlers from Western Europe. Vitally important to the viability of the kingdom, Baldwin established baronies which could be parceled out as fiefs to maintain a feudal army of knights and sergeants. Even lands granted to, for example the canons of the Holy Sepulchre, were fiefs owing sergeants to the army of the king. What this means is that the land was tilled by free tenants who owed feudal service as sergeants, while the profits of the agricultural activity was split between the tenant and the ecclesiastical landlord.

It was also during Baldwin I’s reign that both the Knights Templar and the Knights Hospitaller were established in the Kingdom of Jerusalem. At the time of Baldwin’s death in 1118, both institutions were still too tiny to play a significant role in the defense of the realm, but seeds had been planted that would soon bear extremely valuable military fruit.

Baldwin I died on 2 April 1118 without issue. He left behind a kingdom, not just a city, that was economically viable due to the conquest of both coastal ports and inland areas. It was a kingdom with sufficient land to create fiefs and to assure fundamental self-sufficiency in foodstuffs such as grains, wine and oil. Nevertheless, the situation was still precarious. Letters to the West from this period stress that civilians (particularly unarmed clerics) were afraid to travel between cities without an escort. Many pilgrims still fell victim to Saracen ambushes. This was the background against which the Knights Templar were founded as a band of knights dedicated to the protection of pilgrims. The Israeli historian Ronnie Ellenblum characterizes this as a period in which the ‘threat was continuous,’ adding the crucial point ‘and mutual.’[i] The crusader kingdom-in-the-making was both vulnerable and aggressive. The smaller, Saracen coastal city-states and inland garrisons felt as threatened and unsettled by Frankish presence as the Franks felt about the larger Muslim powers in Aleppo, Damascus and Cairo.