The Creation of "Outremer"

With the capture of Jerusalem, the crusaders' mission was accomplished -- and most wanted nothing more than to return home. Yet, while the immediate threat had been eliminated, Jerusalem remained surrounded by enemies. If the sacrifices of the three-year campaign across two thousand miles were not to be in vain, Christian control of Jerusalem needed to be institutionalized. Yet none of the men who had fought their way to Jerusalem by their own strength on their own resources and watched four out of every five of their comrades die were prepared to hand the Holy City over to the Byzantine Emperor. Thus was born the idea of an independent state — not yet called a kingdom — that would defend Jerusalem for Christendom. For the next two hundred years it would be part of the Latin world yet beyond the sea, and so it became known as "Outremer." 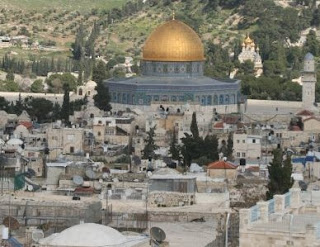 The bulk of the men who survived the First Crusade returned whence they had come, their vows absolved by the restoration of Jerusalem to Christian rule. Contemporaries claim that the surrounding cities had more Saracen troops in their garrison individually than the Franks had altogether. Fulcher of Chartes, chaplain to Baldwin of Boulogne and a witness of both the crusade and the early years of the crusader states, claims that in 1101 the Kingdom of Jerusalem could muster just 300 knights and an equal number of foot soldiers. If these numbers are correct, only six per cent of the knights who joined the First Crusade and less than one third of those who had survived to capture Jerusalem were still living in the East at the start of the twelfth century.

On the other hand, land grants to Western settlers in twenty-one villages north of Jerusalem in 1099 suggests that substantially more commoners remained in the East. Since the poor were more likely to lack the resources to return home, this is not surprising. An estimated 2,000 common crusaders, or roughly four per cent of all those who set out but fully twenty per cent of those who made it to Jerusalem, settled in the Levant at the end of the First Crusade.

Clearly, 300 knights and 2,000 foot-soldiers did not constitute a military force adequate for the defence of Jerusalem against an enemy assault or siege. However, the situation of these remaining Franks was far less precarious than it may seem. Data mining and archaeological surveys conducted at the end of the twentieth century have demonstrated that Jerusalem’s hinterland was overwhelmingly Christian. Thus, these few Franks were not trying to rule over a population of resentful Muslims, but rather surrounded and supported by the native population, a pattern that was recorded across Armenia and in Bethlehem.

Control of Jerusalem and its surrounding countryside, on the other hand, was insufficient to secure the Holy City for Christendom in the long run. Jerusalem needed at least one secure port through which pilgrims and reinforcements could pass, and it needed sufficient fighting men to withstand a determined attack by the Fatimids or Seljuks. The fact that a second wave of crusaders, nearly as numerous as the First Crusade, disintegrated after various defeats while crossing Asia Minor 1100-1101 underlined the severe difficulty of reinforcing the Frankish outpost in Jerusalem by land. If Jerusalem were to remain under Frankish control, it had to have troops of its own. Yet backbone of Christian armies in the early twelfth century consisted of vassals who gave military service in exchange for land — and land was exactly what the Frankish leadership in Jerusalem at the start of the twelfth-century did not have.

Furthermore, the raison d’être of the new political entity was the defense of the most important shrines of Christendom. This was reflected in the fact that Godfrey de Bouillon refused the title of ‘king’ on the grounds that it would be inappropriate for a mere man to ‘wear a crown of gold where Christ had worn a crown of thorns.’ Godfrey chose instead the title ‘Protector of the Holy Sepulchre.’  Yet while the Holy Sepulchre was without doubt the most important of Christian shrines, it was not the only significant religious site in the region. Because Christ had be born, lived and died in the region, almost every town in Palestine, starting with Bethlehem and Nazareth, could claim a connection to some event in the New Testament. For this reason, the entire region was known to Christians simply as ‘the Holy Land.’

This posed four major problems for the few Franks left in possession of this sacred legacy. First, many of the important sites were still under Muslim control and were ‘crying out’ — at least in the eyes of the crusaders — for liberation. Second, even those now in the hands of the Franks had been neglected if not actively damaged during the long years of Muslim rule. Many churches and monasteries were in ruins or in desperate need of repairs and renovation. These sites needed massive investment to ensure both physical and spiritual integrity, the latter in the form of clerical manpower. Yet neither money nor clergy was available in 1100. Third, pilgrims from across Christendom could be expected to flood to these sites and the few Franks remaining had to create the infrastructure and secure the environment to receive them. Last but not least, Jerusalem was so holy that many churchmen believed it should not be subject to any secular authority, but rather remain an ecclesiastical state.

The last issue proved the most pressing. Had the respected papal legate Adhemar still been alive at the capture of Jerusalem, he might have succeeded in asserting church authority over the inchoate political entity then in the making. Certainly, when in late 1099 a new legate, Daimbert Archbishop of Pisa, arrived to take Ademar’s place, he attempted to assert church authority, including obtaining promises from Godfrey about a position of dominance in the future. Godfrey’s untimely death on 18 July 1100, however, dramatically altered the political situation. Godfrey’s knights seized control of the most important fortification in Jerusalem, the Tower of David, and held it in the name of Godfrey’s younger brother Baldwin de Boulogne until the later could arrive. Their action foiled Daimbert’s attempt to establish himself as the ruler of the emerging state — and underlined the brutal reality that Jerusalem belonged not to the holy but to those best able to defend it.