Muslims and Jews in the Crusader States

The fate of the non-Christian natives of the Levant under Frankish rule was by no means as dire as widely presumed -- much less depicted in Hollywood. At no time did the crusader states pursue a policy of genocide. Nor was conversion to Christianity a policy goal of the crusader states. What follows is a short description of the status of Muslims and Jews in the Kingdom of Jerusalem, 1190 to 1291 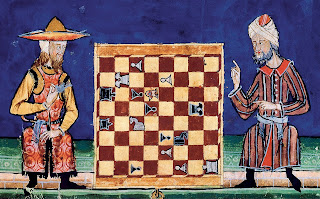 Whether Abbasids, Fatimids or Seljuks, the wealthy and educated Muslims who had formed the ruling class during 400 years of Muslim dominance were displaced by the new Frankish rulers. Those Muslim elites who survived the confrontation with the Franks moved to territories still under Muslim control. Left behind were the poor, the poorly educated and the non-political.

These residents were not only poor and powerless; they were fragmented and divided. Although the Muslims of southern Syria and Palestine were predominantly Sunnis, there was a strong Shia presence in northern Palestine and Transjordan (Tiberias, Nablus and Amman). Shias were also numerous in Tripoli, Sidon and Beirut. Here too, close to the Ismaili stronghold of Alamut in the mountains of Lebanon, were communities of Ismailis. Relations between these different denominations of Islam were neither harmonious nor fraternal.

One might expect — and indeed the Muslims probably did expect — for the Franks to treat their Muslim subjects similarly to “dhimmis” in Islamic regimes. Certainly, the Muslims in the crusader states were subject to extra taxes. Although not required to wear distinctive clothing, Muslims were prohibited from dressing ‘like Franks’. In addition, severe penalties were placed on sexual contact between Christians and Muslims; whether the man was Muslim or Christian, he faced castration, while the woman, Christian or Muslim, had her nose amputated.

Overall, the condition of Muslims in the crusader states was noticeably better than that of “dhimmis” in Muslim countries. Unlike Christians and Jews under Muslim rule, there were no prohibitions on Muslims constructing houses of worship, engaging in religious rituals in public or the wearing of religious symbols. Indeed, functioning mosques are recorded in Tyre, Bethlehem and Acre, and in addition Muslims were allowed to pray in churches that had formerly been mosques. Muslims also enjoyed legal protections, as will be discussed under institutions (Chapter 4). There was no discrimination in housing nor prohibitions against riding horses or carrying arms. There was no institutionalised culture of humiliating and demeaning Muslims, although it is likely that individual Christians, mainly those who had suffered under Muslim rule, may have taken pleasure in the reverse of status.

The cumulative impact of this comparatively mild treatment was a Muslim population that remained remarkably docile throughout the Frankish period. There is not one recorded incident of rebellion or riots after the consolidation of Frankish rule in the 1120s. Even during Saracen invasions of Christian territory, there is no evidence of cooperation and collaboration on the part of Muslim inhabitants with the Saracen invaders, except in Jabala and Latakia, which welcomed Saladin in 1188. Perhaps even more astonishing, archaeological evidence of numerous unfortified farms, manors and rural villages shows the Christian population did not fear Muslims living in their midst.

Perhaps Ibn Jubayr, a visitor from Muslim Spain in the late twelfth century, accurately assessed the situation of the Muslims in the crusader states when he wrote:

Their hearts have been seduced, for they observe how unlike them in ease and comfort are their brethren in the Muslim regions under their [Muslim] governors. This is one of the misfortunes afflicting the Muslims. The community bewails the injustice of a landlord of its own faith, and applauds the conduct of its opponent and enemy, the Frankish landlord, and is accustomed to justice from him.[i]

Although never official policy, the crusades unquestionably fostered antisemitism in Western Europe. Long before the first crusaders reached Jerusalem, Jewish communities in the Rhineland were attacked, and many Jews were massacred mercilessly. All subsequent crusades were likewise accompanied by outbreaks of violence against Jews in Western Europe. It may therefore come as a surprise that Jews in the crusader states suffered no persecution. Instead, the Franks mostly treated Jews the same as they treated Muslims, with rough tolerance.

In the early years of conquest, Jews were undoubtedly massacred, but not because of a targeted policy. They were killed alongside the Muslims when cities that resisted the crusaders fell to assault. Likewise, when cities agreed to terms, Jews were allowed to withdraw with their portable goods and chattels on the same terms as their Muslim neighbours. This led to a reduction in the number of Jews living in the Frankish territories in the immediate aftermath of conquest. Famously, Jews were prohibited from resettling in the city of Jerusalem.

Yet there is ample evidence that Jews returned to other cities ― or never left at all. Records show large Jewish communities in Tyre and Acre throughout the Frankish era and smaller communities in Ascalon and elsewhere.  Furthermore, there were at least two dozen villages occupied entirely by Jews in Galilee, between Tiberias and Nablus.

Like the Muslims, Jews throughout the crusader states were subject to extra taxes — just as they were forced to pay tribute as ‘dhimmis’ when living under Islamic rule. They were, however, allowed to practise their religion publicly without inhibition and, unlike under Muslim rule, could — and did — build new synagogues, notably in Nablus and near Safed. For the most part, they were also free to govern their own affairs and live in accordance with Jewish laws and customs without interference. There was no ghettoization and not one recorded incident of communal violence against Jews. Thus, while their status was undoubtedly inferior to that of the Christians, the situation of Jews in the crusader states was markedly superior to the condition of Jews across Western Europe and, as with their Orthodox Christian neighbours, better than their status as ‘dhimmis’ in Islamic states.[ii]

Meanwhile, the First Crusade had sparked a Jewish messianic movement. According to Joshua Prawer, ‘in some communities the Jews sold their property and waited for the Messiah who would bring them to Jerusalem’.[iii] Certainly, the establishment of the crusader states and regular trade and pilgrimage traffic between the Holy Land and Western Europe allowed European Jews to undertake the pilgrimage to Jerusalem and other sacred places in the Holy Land. The pilgrim traffic to the crusader states included a substantial portion of Jews ― and like their Christian counterparts, many of them chose to stay in the Holy Land.

Jewish immigration to the Holy Land in the Frankish period led to a flourishing of Judaic culture. There were rabbinical courts in both Acre and Tyre (and possibly Tiberias), and Palestine was one of only three centres in the world for Talmudic Study. From the second quarter of the thirteenth century until its fall, Acre became a vibrant Jewish centre, a ‘cross-section of the different communities of the Diaspora. The leading elements were Jews from Spain and from northern and southern France, in addition to eastern Jews, whether Palestinian-born or from neighbouring Moslem, countries’.[iv]

Last but not least, there was still a sizeable Samaritan population. (Note: Samaritans accept only the first five books of the Old Testament as divinely inspired.) Although many Samaritans had been driven into exile across the Middle East, the centre of Samaritan worship and scholarship was in Nablus, which is where the largest Samaritan population was concentrated in the crusader era. A large number of Torah scrolls produced by Samaritans have survived from the crusader era, providing evidence of a flourishing of activities in this period.

[iii] Joshua Prawer, ‘Social Classes in the Crusader States: the ‘Minorities’ in A History of the Crusades Volume 5: The Impact of the Crusade on the Near East, Eds. Harry M. Hazard and Norman P. Zacour (Madison, University of Wisconsin Press, 1985), 97.